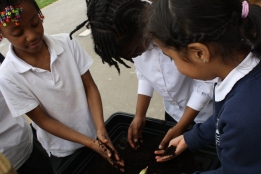 How many strawberry plants do we need to make a strawberry patch? We measured out our plot, worked out the spacing between each plant and planted up the strawberries. 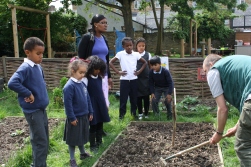 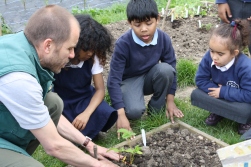 We posed the question “Where does most of our fruit come from?” We looked at the food miles of fruit grown in the world and compared that to locally grown produce.

A few months ago we decided to move our original veggie garden to a sunnier position. The trees around the original site were causing a problem with the amount of shade and their ever increasing root systems. We were also very keen to increase the amount of raised beds so that each class would be able to enjoy the area and grow their own crops. We were lucky to be given 8 tonnes of free soil from the Higgins building site, around the corner from our school. This was great as we have very limited funds. As you can see in previous posts, it took several weeks of lunch time clubs to move the soil into the beds. We cleared out the larger stones and pottery from the soil and found chunks of chalk which the children collected to use on the playground. 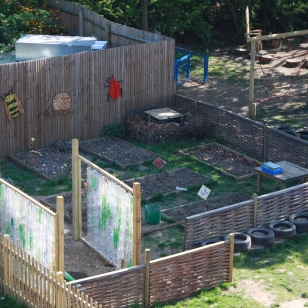 We have in addition to the veggie garden created an orchard. This will be an ongoing project with trees being planted by the reception children as they join the school each year. At the moment we have 3 pear and 3 apple trees, along with several fruit bushes blackberries, raspberries and loganberries. As you can see from the photo, this is a work in progress.

The posts for the plastic bottle greenhouse have been put in, just in time to get our seeds planted.

Greenhouse posts being cemented in 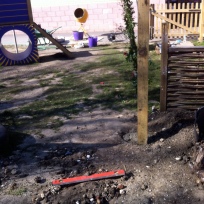 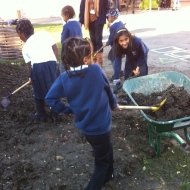 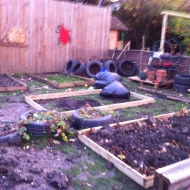 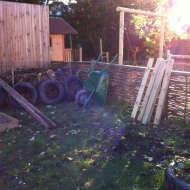 We’ve been hard at work building raised beds and moving the soil we had donated from the Higgins construction site into them. We’ve also been filling our tire planters and gathering the natural chalk form the soil. Messy work, but loads of fun! 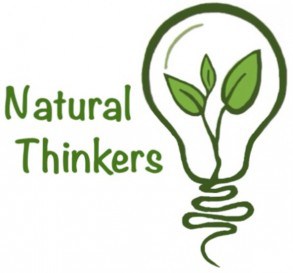